Guruvaar - the day devoted to the Guru! (Thursday) 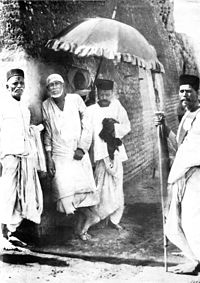 In our Scriptures, Thursday has been described as the day when we can express our devotion to our Guru. Likewise the Guru bestows all his / her blessings on the devotees on this special day.

Sai Baba never claimed that he has special powers. In fact, he never was keen to enlarge his following by soliciting or any other such action. In fact he lived the life of a saint. The simplicity of his life was the essence of his philosophy. He propagated helping others, love for all, forgiveness, and contentment. These put together only can bring inner peace.

We find certain similarities in the teachings of Guru Nanak Devji and Sant Kabir. Here is more like Kabir who did not found any religion. In fact that is the essence of our Hindu religion. When we remove the ritual practices, we find that our religion teaches all what Sai Baba propagated. This is a good reason why his devotees are increasing by the day. It is not only people from Shridi, Maharashtra, or people from India, but Sai Baba is emerging as a true Guru for people around the world.

His devotees throughout the world remember him with respect on this special day - Guruvaar that is Thursday.
at January 24, 2013 No comments: