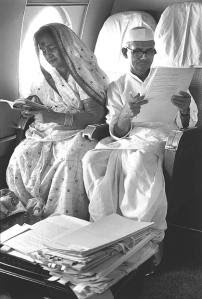 Jai Jawan, Jai Kisan – these words immediately conjure the name of Lal Bahadur Shastri – one of India’s greatest leaders and a noble soul who inspired the entire nation by this imaginative, bold and patriotic slogan.  Pandit Nehru had passed away in May, 1964. There was one question on everyone’s lips – After Nehru who?

The country’s reins passed into the hands of this diminutive- little figure. Shastriji was short in height but really tall in stature. That was a time when the country was low in spirits and nursing the wounds of the demoralizing defeat at the hands of the Chinese. It was a time when the nation was suffering cruel food shortages. The situation was so bad the nation was dependent upon food aid – sub-standard wheat shipments were sent by the US with many strings attached.

Shastri’s initiatives later on spurred the Green Revolution in India. In fact he is the leader who said to have motivated Hindi film industry’s famous actor Manoj Kumar to produce the patriotic film “Upkar”. It is a film which motivates people of this land to be prepared to sacrifice anything for the love of our motherland. 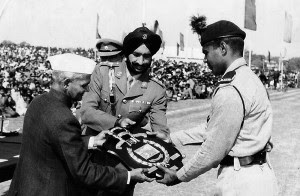 Again it was Shastri who visited Anand in 1965 and announced the formation of the National Dairy Development Board. It happened to be the first national agricultural body set up and headquartered outside New Delhi.

In 1965 Pakistan thought of taking advantage of India’s military weakness and launched an invasion on the Western Sector. They probably could not visualize the inherent strength of this great simple looking leader. He gave them an iron fist. With full freedom given by Shastri, the Indian Armed Services pulverized the enemy and pushed to very gates of Lahore!

It was only extreme pressure applied by US and allies that forced Shastriji to enter into a ceasefire agreement in Tashkent, Uzbekistan. Shastriji’s untimely demise shocked the entire nation and deprived this country of a leader who would transformed the entire country, if he would have got just five years to lead our nation. 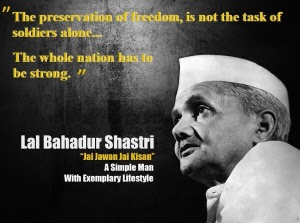