All good things must come to an end; so do all festivities. That will create space for a new beginning. At the same time it also gives all those who are involved in the festivities a relief, a break from the fast paced celebration. These 10 days of prayers to lord Ganesha of bringing Modaks and other sweets, of sharing and distributing Prasad to all who come to the Pandal for the Darshan pass very swiftly.

Today is the day of Visarjan. The devotees will immerse the idols of their favorite lord Ganpati in the sea. It’s the way of bidding adieu while requesting him to come again. Visarjan is also celebrated as a thankful sendoff to our favorite lord. It is said that whenever a new project is started with prayer to lord Ganpati, it brings good luck.

I have selected a number of images from the net which I consider truly reflect the festivities associated with Ganpati Visarjan. The sheer spirit and the enthusiasm with which the favorite lord is given a sendoff keeps people motivated enough to look forward to the next year’s celebration. Preparations for Ganesh Chaturthi are made a number of months before the festival begins. Now a days in Mumbai many housing societies have started making their own Mandaps. By this way social interaction among the society members is increased. Prayer to lord Ganesha becomes the common desire of all people residing in the society.

At the end of the photo gallery I have given some information about the beginning of the festival which will interest you.

Ganesh Chaturthi is said to have been celebrated since the days of Maratha rulers: Satavahana, Chalukya and Rashtrakuta. Mainly celebrated in the states of Maharashtra, Tamil Nadu, Karnataka, Andhra Pradesh with a lot of zeal and splendour, Ganesh Chaturthi is the most popular festival of Maharashtra. Ganesh Chaturthi was started by Chhatrapati Shivaji as a public event to promote traditions and nationalism, this festival was even celebrated by Peshwas to worship Ganapati as their family deity. The festivities remained a family affair until the festival was revitalised by Bal Gangadhar Tilak in the late 19th Century, to take the message of freedom struggle to all Indians. This festival brought in a feeling of unity and togetherness in Indians that helped in revival of their patriotic spirit. Through the medium of this festival he brought together all the classes of societies against British by getting rid of the caste differences. He stressed on it that Ganesh Chaturthi was a festival for everyone irrespective of the caste or class, and so he organised cultural events like dance dramas, musical nights, and religious gatherings on this festival. That was the time when social and political gatherings weren’t allowed by the British. Festivals like Ganesh Chaturthi that continued for ten days gave people of every religion the scope to interact and know each other. It is from that time this festival has been celebrated every year with great fervor all over the country. 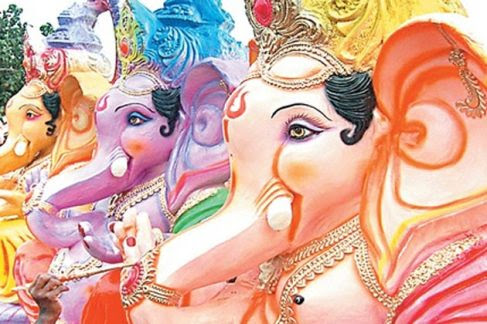 Ganesh Chaturthi is celebrated with festivities lasting ten to twelve days every year. The occasion for the celebration of the birth of Lord Ganesh, son of Lord Shiva and Parvati.

Ganesh symbolizes intelligence and application of mind. There are many incidents in Lord Ganesha’s life which symbolize his sharp wit and presence of mind. Among them the most famous of them is his competition with his elder brother Karthikeya.

As the story goes Lord Shiva called both his sons and told them that whomsoever circles the world three times will be given the prize of a magical Mango which was presented to him by Sage Narad. Ganesha realized that his vehicle the mouse, would be of no match against the swift flying peacock of his elder brother. He thought for a moment, smiled and took three circles of his parents. When they asked him why they were circling him, he replied that they were his world, and taking three circles of them was equivalent to circling the world three times. Lord Shiva, Goddess Parvati were very pleased and they gave the fruit to Ganesha. 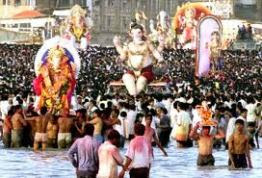 The festival falls in the fourth day of the waxing moon in the Hindu lunar calendar month of Bhadrapad which mostly falls in September according to the English Calendar. While the festival is celebrated all over the country, it is in the Indian State of Maharashtra that the celebrations are specially famous. 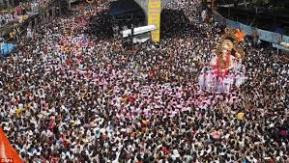 In medieval history, the celebration of Ganesh Chaturthi can be traced back to the times of the great Maratha King Chatrapati Shivaji Maharaj. However following the decline of the Maratha empire, the festival lost its state patronage. It was the famous freedom fighter Lokmanya Tilak who revived this festival as a community celebration and to gather people in his fight against British Rule.

Indeed he has left behind a lasting legacy. Every year the festival gets bigger and more and more people revel in the worship of the Lord and seek his blessings.
at December 02, 2013 No comments: 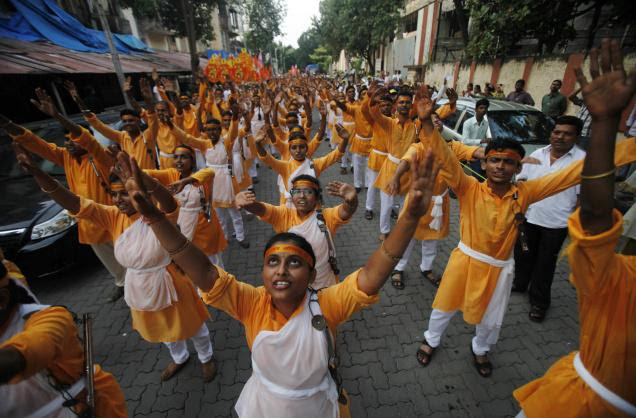